Visit these pages regularly to keep up to date with what's happening at the lakes and the fish that are being caught.

We have just spent a week at Lake Meillant getting the fishery ready for the new season.

We have rebuilt the four main platforms for our guests so that they are much bigger and stronger than before. There is now ample room to put a bivvy up and have plenty of room to fish and move around. The photos in the Gallery show the last swim being built in the Shallow Arm at the top right hand corner of the lake, which replaced the oldest of our original platforms. This was one of my favourite places to fish. You can fish into the shallow bay when the fish are there and fish out of it when they are not without having to move.

We have also rebuilt the bridge over the culvert and cleared the track along the dam separating the top pond from the main lake which makes access across really easy again. The bridge has been reinstated in preparation for putting a new platform on the far side later this summer so that there are two good swims on the top pond rather than the one there now.

Finally, we have introduced a new batch of fish to supplement the existing stock of huge carp already present. These are mainly between 20-25lbs and came from the same line that the original fish were stocked from fifteen years ago. They are young, strong , healthy fish which we expect to grow very quickly to start with and then settle down to a growth rate of about 5-6lbs per year, much like the original batch. They have never seen an angler before and reports from the lake this week suggest that despite water temperatures in single figures the fishing has been pretty busy! 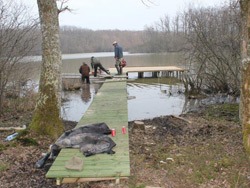