Chalet Lake was the first water in France to be managed specifically for British carp anglers to visit. We have been sending fishermen there since 1987 and guess that the number of anglers who have been there must run into thousands. It is a classic French carp lake and a water by which many others are judged.

The lake is near Metz which is 350 miles from Calais. The trip takes about four to five hours straight down the AutoRoute from Calais. The AutoRoute’s are a bit like driving down the Ml when it’s closed. The nearest substantial town is St Avold, about twenty five miles to the north. There are local supermarkets, phones and garage within a few miles.

Chalet Lake is about twenty acres in the shape of a blunt ‘Y’ and could be described as a classic ‘estate’ lake, running about two feet at the shallow end to 10 feet near the dam, which is at the blunt end of the ‘Y’. One bank is open and grassy, fringed with reeds and ideal for setting up bivvy encampments. The far bank is wooded down to the water’s edge, with many of the trees and bushes growing out over the water. There are several swims along this bank, which apart from being twenty degrees cooler in hot weather, give you the chance to catch serious fish within a few feet of your toes. Just like the old days.

Both lakes offer the finest carp fishing in France

There are no hassles fishing at our carp lakes In France. There are no problems with close seasons, bivvies, night fishing, licences, bait restrictions, bait boats or the number of rods you like to fish. We simply ask you to behave as you would like your neighbour or the chap fishing before you to have behaved.

You can forget Nash, Hutchinson or Fox Carp Fishers Abroad have the ultimate Bivvy! The Chalet stands on stilts actually in the water at the dam end of the lake. There is a veranda which wraps around the Chalet to give a platform on the lake side of the building from which to sit, BBQ, sunbathe and even fish. The Chalet is constructed of stone and was originally put up as a hunting lodge for parties chasing after wild boar and deer which used to inhabit the forest on the far bank. Sadly, the wild boar have gone (though rumours still persist) but the deer are still plentiful.

The accommodation is pretty basic and whilst it is fine as a rallying point for meals and ablutions and somewhere to keep all the kit it is not the sort of place to take your wife. Unless she is a fishermen as well. During bad weather, some people have even slept in it! The price we pay for such splendid isolation means we are not connected to mains services. The toilet is flushed with lake water into a septic tank and lighting is by rather romantic candles or a tilley lamp for the better organised. There is an excellent fire place in the Chalet which can be fuelled by dead wood from the forest (take a bow saw).

Chalet Lake holds a really big head of carp and catfish at densities that don’t happen in this country because the water temperatures are so low and the growing season too short. Where to start? There are heaps of common and mirror carp to over 50lbs at the time of writing (January 2013). They have been growing at an astonishing 5-7lbs per year and while I am sure they will slow down a bit, should continue to grow. The average size, in the warmer waters of our French carp lake, is around 31lbs. There are lots of thirties and many forties. The biggest fish reported last year was high fifties.

There is a significant head of grass carp to mid fifties. These fish don’t look much like carp, more like big chub really. For the first two years after we introduced these fish not a single grass carp was caught though they could easily be seen. This was an interesting (though unsuccessful) period of experimentation with popped up bunches of grass and fresh leaves. Fortunately they now take boilies and particles freely and are caught on conventional carp rigs unlike Meillant where they are rarely caught. They tend to fight pretty gently until you get them close in when they go berserk, often tearing off fifty to sixty yards of lines in a few moments. They are excellent at fighting in the landing net which accounts for the thirty odd broken nets reported to us over the years (two were mine).

To add a bit of colour to proceedings, there are koi carp to mid thirties which are seriously fast fish. Like super-charged Technicolor carp. Tightening up on these is a bit like striking at a trout on a long fly line. Your line points one way but the fish swirls miles away from where you think it ought to be. When we land them we don’t weigh these fish, we like to value them in pounds sterling.

There are a number of silver carp, which we originally put in at a few pounds each as food for the catfish. Today there isn’t a single silver carp of less than forty pounds and the biggest are absolutely huge, certainly over fifty. They feed on algae and not one has ever been caught though they are regularly seen.

And then there are the Catfish. If you thought a big carp can put up a scrap, you should try a big cat. There are plenty of these fish to over 100lbs, with loads in the fifty to eighty pound range. Many of our regular anglers fish exclusively for these predators and there have been some huge catches.

If you are keen on the cats, then 2013 is the year to fish Chalet Lake because next autumn, there will be some radical management that will involve removing most of the cats and rebalancing the fishery in favour of our beloved carp again. We will leave some of the big cats there but a fraction of the number that are currently swimming around. 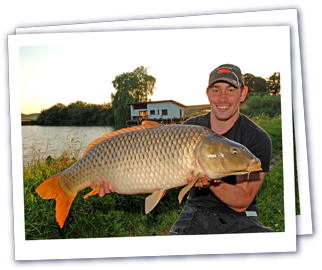 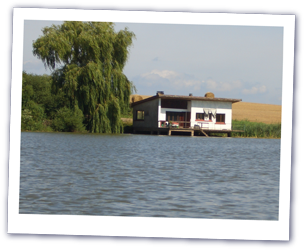